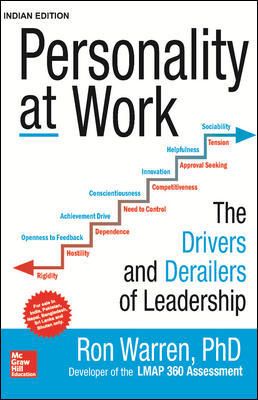 Skip to the beginning of the images gallery
Content Area

Personality at Work: The Drivers and Derailers of Leadership

1st Edition
9352605551 · 9789352605552
By Ronald Warren
An Evidence-Based Approach to Personality and LeadershipA leader’s bullying and constant dismissal of his team’s concerns nearly take down an entire company—and the global financial system. The U.S. Government has to provide a $182 billion bail… Read More
Buy from Amazon Buy from FlipKart
Table of contents

Part III. Dominance: Derailers and Development
Chapter 11: The Dominant Personality of Our Time
Chapter 12: The Toll of Hostility
Chapter 13: Dominance Is Not Leadership
Chapter 14: Leadership EQ and Teamwork Behaviors

An Evidence-Based Approach to Personality and Leadership

A leader’s bullying and constant dismissal of his team’s concerns nearly take down an entire company—and the global financial system. The U.S. Government has to provide a $182 billion bailout. A new CEO transforms a near-bankrupt auto company and its infamously competitive culture becomes more collaborative and thrives—making it the only auto manufacturer to not take bailout funds.

These stories share a truth: Each leader’s personality set the course of their company’s future. We all know that IQ, education, knowledge, and technical skills are essential for professionals, but they alone are insufficient for effective leadership. Who you are as a person—your personality and character—drives leadership performance and determines who thrives and who fails.

In Personality at Work, psychologist Ron Warren lays out the key personality traits that drive high performance—and the common traits that derail it. Warren clusters closely related traits into four dimensions of behavior:

Each cluster is broken down into personality traits—13 in all.

Personality at Work draws from research using the renowned LMAP 360 with 20,000 leaders and 250,000 360-feedback raters. An assessment used at organizations around the world, LMAP 360 is used at Harvard Business School, Yale School of Management, Underwriter Laboratories, BearingPoint, Deloitte, Teach for America, Clayton Homes, and more than 35 hospital systems throughout the United States.

Personality at Work integrates research on personality and performance, teamwork, communications, judgment, and decision-making. You will learn how to …

• Recognize your own personality patterns and those of colleagues
• Understand the links between personality, leadership, and organizational effectiveness
• Turn insights into action, leading with Grit and EQ to drive individual and team performance